Mallorca is a common stop for cruise ships sailing in the western Mediterranean. The port city of Palma De Mallorca is on the southwestern side of the island. One of the most prominent sights in Palma is the La Seu cathedral, which was completed in 1601 after more than 300 years of construction. Mallorca is a Spanish island, located approximately 150 miles east of Valencia and 100 miles south of Barcelona.

Montreal is the farthest port inland for many cruises that voyage to Quebec. These cruises start in New York or Boston, then travel north up and around Nova Scotia, Prince Edward Island and New Brunswick before heading southwest on the St. Lawrence River. Montreal is considered one of the prettiest cities in North America, an excellent spot to end a New England-Canada cruise.

Key West is the southernmost town in Florida, known for some pretty wild partying and access to incredible coral reefs. It’s a popular stop on cruises to the Caribbean that originate in Miami, Fort Lauderdale, Tampa and Galveston. Royal Caribbean’s Enchantment of the Seas and Carnival Victory currently make weekly trips to Key West from Miami.

Hubbard Glacier is a popular and spectacular stop on cruises to Alaska. It stretches over 75 miles from Yukon, Canada to Disappointment Bay in Alaska. It’s the kind of thing you expect to see on a cruise to Alaska, hardly a disappointment.

A cruise visit to Manaus, Brazil is about as far as you can get – figuratively – from a day cruising the middle of an ocean. And it’s literally 750 miles upriver from the Atlantic. Manaus is the largest city on the Amazon River.

A visit to the islands of Tierra del Fuego is just one piece of the amazing South American fjord-viewing cruises that travel around the southern end of Cape Horn. These cruises are usually two weeks long and most frequently sail from Buenos Aires, Argentina to Valparaiso, Chile – or from Valparaiso to Buenos Aires. Some also visit Antarctica!

Most of the cruises to Fiji begin in Australia or Tahiti. But you’ll also find the occasional long distance cruise that begins as far away as Hawaii or Los Angeles.

It’s not exactly surprising that Monte Carlo is a popular port-of-call for Mediterranean cruises. You’ll frequently find cruise ships traveling eastward that begin in Barcelona and westward out of Civitavecchia (near Rome) in Monaco’s harbor.

Nassau is the most popular cruise stop in the Bahamas. Located less than 200 miles from the coast of Florida, it’s on the itinerary of most cruises from Miami, Fort Lauderdale, Port Canaveral and Jacksonville.

Seabourn Quest is the newest ship in their fleet, having made its initial voyages in 2011.  Like the other five Seabourn ships, a Quest cruise is a luxury experience – suites, more suites and nothing but suites.  The room sizes range from 295 to 1,682 square feet so some suites are, well, sweeter than others.  But all 225 have ocean views and most have verandas. 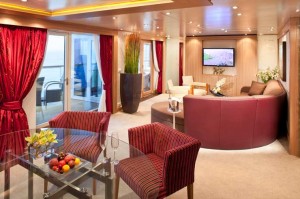 Dining on Quest includes the indoor-outdoor cafe “The Colonnade”, the Patio Grill and two primary dining rooms known as The Restaurant and Restaurant 2.  Bars and lounges include the Observation Bar, Sky Bar, Patio Bar and The Club.  It wouldn’t be a cruise ship with an entertainment venue, called the “Grand Salon” on Quest, featuring lectures, cooking demonstrations and movies during the day plus dancing and live performances at night.

Seabourn guests can stay active in the top deck swimming pool, in the well-equipped fitness studio or the shuffleboard and putting green of “The Retreat”.  When the water is warm, the captain has option of opening the “Marina”, an opportunity for guests to do some sailing, canoeing and swimming off the aft end of the ship.

TheCruiseNexus.com has a complete schedule of upcoming Seabourn Quest cruises, as well as the rest of the Seabourn fleet.   Quest currently spends the northern hemisphere summer cruising the Mediterranean.  The rest of the year is spent in the southern hemisphere (where, conveniently, it’s summer again) cruising around South America and making some exceedingly memorable 21-day cruises to Antarctica.