It’s Thursday October 24, 2013 and there are 18 cruise ships departing today on voyages ranging from the Caribbean to New Zealand, including:

Looking ahead three months, 17 cruises will begin on Friday January 24, 2014, including a 3-night trip from Miami to the Bahamas on Royal Caribbean’s Majesty of the Seas. 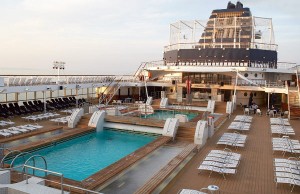 Of the nine cruises scheduled to depart today, October 22, 2013, one of the out-of-the-ordinary choices is a trip from San Diego to Hawaii.  San Diego isn’t an overly popular cruise departure point, with less than ten cruises schedule for most months.  But its position as the southwest-most major city in the continental United States makes it the best choice for a cruise from the mainland to Hawaii.

Today’s cruise is a 15-night cruise from San Diego on Celebrity Century that will provide ocean-side views of all of Hawaii’s major islands.  The ship spends four days at sea getting to and from Hawaii, but that still leaves plenty of time to visit Hilo, the Kilauea Volcano coast, Kailua and Kona, Maui and Honolulu.  The return trip also includes a stop in Ensenada, Mexico. 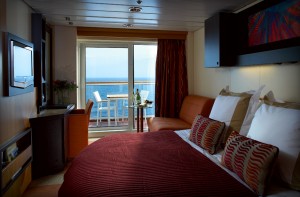 Celebrity Century is a somewhat small-ish cruise ship (1814 guests) that first sailed in 1995 but has been renovated a couple of times to keep things up-to-date.  The AquaSpa by Elemis is considered one of the nicest spas to be found on a cruise ship.  The Main Restaurant has a lot of traditional cruise ship dining ambience, while the Murano Restaurant offers a more intimate experience for a special evening.  The Martini Bar features a bar topped with ice to keep drinks especially cool.

Celebrity Century will be making cruises out of other Pacific Coast cities next year – Los Angeles and Vancouver, while cruises from San Diego to Hawaii (17 and 18 nights) will continue to be offered on ms Veendam.

Looking ahead four months to February 21, 2014, there are 20 cruises scheduled to begin, including MSC Opera making a 3-day round-trip from Durban, South Africa.

There are 20 cruise departures today, including:

Look ahead six months and you’ll find that a transatlantic cruise from Fort Lauderdale to Southampton, England on Emerald Princess is one of the 22 cruises scheduled to depart on Friday April 18, 2014.

There are seven cruises scheduled for departure today, including:

Looking ahead four months, there will be 38 departures on Sunday February 16, 2014, including Celebrity Infinity’s 14-night voyage to Antarctica, round-trip from Buenos Aires.

Looking ahead three months to January 13, 2014, there are 23 cruises scheduled to begin, including an 11-night southern Caribbean cruise from Fort Lauderdale on Royal Caribbean’s Legend of the Seas.

There are 12 cruise ships departing on a wide variety of cruises today, including:

Six months from today, April 10, 2014, you could be aboard one of 16 ships departing from 15 different ports, including an unusual 19-day cruise through the Suez Canal from Mumbai, India to Civitavecchia on Seabourn Odyssey.

It’s Tuesday October 8, 2013 and there are 14 cruises scheduled to begin today, including several that are 11- or 12-days long…

Two months from now you could be aboard MSC Poesia, leaving on an 8-night round trip from Buenos Aires – one of 34 cruises scheduled to depart on Sunday December 8, 2013.

There are hundreds of cruises every year from major ports like Barcelona and Miami, but maybe you’d like to try something that begins from an unusual departure point – like Charlotte Amalie.  Charlotte Amalie is on St. Thomas and is the largest city and capital of the the US Virgin Islands.  The city is located on a well-protected harbor called Long Bay that provides easy access to the islands of the eastern Caribbean.

Seabourn Cruise Line has scheduled some 7-night eastern Caribbean cruises from Charlotte Amalie for February and March of 2014 and 2015.  The cruises include visits to St. Martin, Antigua, St. Kitts, Guadeloupe and the British Virgin Islands.  Seabourn Pride will be making the cruises in 2014, replaced by Seabourn Legend in 2015.

There are also one-way cruises into and out of Charlotte Amalie before and after the “mini cruise season” there.  The inbound “repositioning cruise” begins in Oranjestad, Aruba and is a 7-night tour of the southern Caribbean.  The outbound cruise is a bit more extensive – a 13-night voyage from Charlotte Amalie to Barcelona.

Today’s batch of worldwide cruises adds up to 19 departures, including three cruises with an Istanbul flavor…

Looking ahead five months, there are 24 cruises scheduled to begin on Friday March 7, 2014, including a 13-day South America cruise on the unusually small Celebrity Xpedition (with space for only 96 guests, it’s more of a large yacht than a cruise ship) that features several days around the Galapagos Islands.